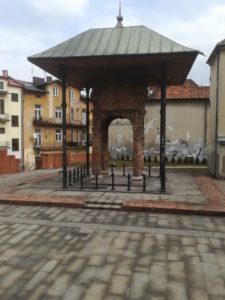 Bimah- the remnants of the Old Synagogue

The first trace of Jewish settlement dates back to 1445 where in the city chronicles we can read about a Jew named only as Kalef. Since then Jewish settlemet in Tarnów begins and lasts untill II World War. However it wasn’t untill the late 17th and early 18th century that Jewish were allowed to settle down in the north east part of the city. At that time Jews own a cementary and a synagogue called The Old Synagogue. They dabble in trade and all sorts of business. Next centuries coincide with the growth of the Jewish culture, especially the assimilation process with the Poles. The 80’s of the 19th century mark the beginning of the Zion movement connected with the first attempts to settle in what is now Israel. The 20th century is the time of shaping jewish identity as well the hell of Holocaust  which most Jewish experienced.

Visiting the places on the route: 3h